Gold Award from Green Tourism for ecological business practice ... King Size 'Forest Bed' made at home with yew posts and elm sides from the owners trees in both cottages ... WiFi Broadband with speeds of up to 13Mb/s now available in both cottages ... 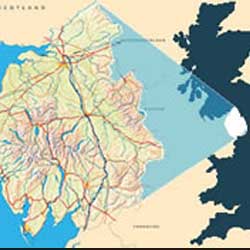 The Lake District Peninsulas
Cartmel peninsular, where you'll find the Cartmel Holiday Cottages, is one of the Lake District peninsulars along with Furness peninsular. The Lake District Peninsulars were originally 'Lancashire-over-the-Sands' as the easiest way of reaching them was via the sands of Morecambe Bay, a route taken by coaches, horses and pedestrians: therefore it was easiest to administer from Lancashire. Today's Cumbria is comprised of the old counties of Westmorland and Cumberland and these parts of Lancashire, and many people still celebrate those distinct roots. The A590, the main road used to reach the area nowadays, was only relatively recently built on what was reclaimed land. The only other route was from the north, via the road south alongside Windermere. 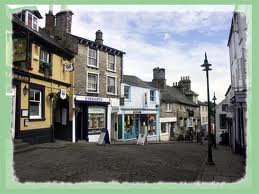 Kendal and the Southern Lakes
From the lively market town of Kendal offering an eclectic mix of arts and culture, quaint cobbled streets and yards and an enjoyable shopping experience to the majestic fells and sparkling lakes which form the very essence of the famous South Lakeland landscape - true Wainwright country - this is a spectacular area of the county. Add to this a cluster of bustling Lakeland towns and villages, peaceful valleys and traditional squares and courtyards and you have the perfect holiday destination.
Come to the Kendal Mountain Festival in November, Kendal Calling music festival in July or Mintfest around the end of August - beginning of September.
Kendal Brewery Arts Centre, cinema and restaurant
K Village shopping centre

Cartmel
The village of Cartmel is truly idyllic with a picturesque market square (complete with fish slabs and village pump) surrounded by a delightful assortment of genuine olde-worlde buildings including inns, shops and private dwellings. Ancient streets wend their way from the square with quiet flower-filled corners, delightful streamside walks, hump-backed bridges and cobbled pavements.The ancient village of Cartmel is famous for the 12th century Cartmel Priory with its beautiful stained glass windows, modern sculptures, and ancient choir stalls. Leading off the village square, with its market cross, water pump, and fish slabs, is the Cartmel Priory Gatehouse, now a Heritage Centre which depicts the history of the monastery, and the village. The village also houses a variety of interesting shops and traditional pubs around its main square. Around the square, and in the narrow winding streets leading from it, are numerous ancient and interesting buildings. On the market square is Cartmel Village Shop, famous for its Sticky Toffee Pudding. Cartmel hosts its highly popular steeple chase meetings at the spring and summer bank holidays. The course is one of the smallest and most picturesque in the country. Also at the Spring Bank Holiday is the Holker Garden Festival at nearby Holker Hall.
www.cartmelvillage.com 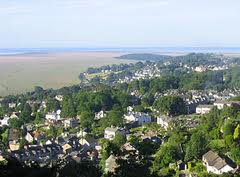 Grange-over-Sands
Genteel Grange-over-Sands is an excellent example of a prosperous, Edwardian seaside resort. Steeped in elegance and charm, this is the perfect place to indulge in a very English pastime - a leisurely stroll along the fine promenade, a walk in the Ornamental Gardens and afternoon tea in one of the many fine cafes. Looking over Morecambe Bay's sands to the south, the town is more sheltered than much of the Lake District. Once an important headquarters for the walk across the tidal sands from Hest Bank to Lancaster, the crossing is now a tourist attraction rather than a necessary travelling shortcut. Now, as then, a guide is required to cross the sands. The tide changes swiftly, and there are many areas of quicksand. To enhance Grange for seaside worshippers, a mile-long promenade, stretching from Blawith Point to the Victorian railway station, was built in 1904. Next to it are the Ornamental Gardens with rare trees and plants. Waterfowl enjoy the artificial lakes. Specialist shops abound. Higginsons, a butcher shop, won a "best butchers in Britain" award. There are a large range of eating establishments where local specialties such as Cumberland sausage, Holker venison, Morecambe Bay shrimps, and Flookburgh flukes are on offer.
www.grangeoversands.net 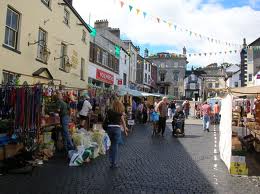 Ulverston
This quirky market town, renowned for its year round programme of colourful festivals, has many claims to fame, including being the birthplace of Stan Laurel and home of the world famous Laurel and Hardy Museum. The twice-weekly street market, charming speciality shops and narrow, cobbled streets are a major draw for local people and visitors alike. Periodically there are also speciality food fairs selling organic produce and local delicacies. Ulverston, marks the start of the 70 mile Cumbrian Way and holds many pleasant surprises for the visitor. The Lakes Glass Centre is another Ulverston attraction offering a chance to see glassmakers using traditional methods, and to visit the 'Gateway to Furness Exhibition'. The town is credited with inventing pole vaulting as a sport in 1879. Outside the town, high on a hill, sits the Hoad Monument, a copy of a lighthouse, built in 1850. It was built as a tribute to Sir John Barrow, 1764-1848, an author, explorer and Under-Secretary to the Admiralty. Sometimes, the monument is open to visitors. At the top are stunning views over Morecambe Bay and the Lake District .
www.ulverston.net 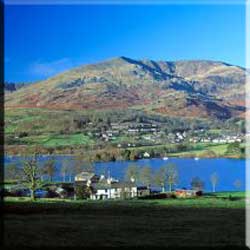 Coniston
Near to Coniston is Brantwood, home of the well-known author and philosopher John Ruskin in the past, and now a museum and learning centre. Across Coniston Water from Brantwood lies the Coniston Old Man, a wonderful mountain which rewards successful walkers with fantastic views from its summit. In Coniston itself is a variety of fine shops and places to eat, as well as the Coniston Brewery. The Brewery, amongst its repertoire of true British beers, sells from its Black Bull pub the Thurstein Pilsner beer brewed according to authentic German brewing regulations (Thurlstein was the old Norse name for Coniston Water).
Coniston Water on a still day mirrors the beautiful Lakeland fells that surround it and has a shoreline made for picnics. With the sparkling seas stretching out into the horizon, gentle, rolling countryside inland, a fascinating maritime history and rich religious heritage, the nearby Lake District Peninsulas offer a rewarding combination of countryside, coast and culture with charming villages and seaside resorts.
Coniston attractions
Brantwood
Coniston Brewery

Arnside
Arnside is situated on the southernmost tip of the Lake District is set in a designated Area of Outstanding Natural Beauty where low limestone hills, marshy plains, and deciduous woodlands characterize the surrounding land.This former fishing port has retained many of the features from its past and the beautiful pier and port areas of the town offer stunning views across Morecambe Bay as well as providing an enduring historical reminder of Arnside's illustrious past. The village is rich in history. To the south of the village there are 15th century pele towers, which were constructed to defend against the marauding Scots.The area between Arnside and the nearby village of Silverdale provides interesting walking. The wooded hill of Arnside Knott - a 520 ft high flat rock most of which is owned by the National Trust - presents views of Morecambe Bay and the Lake District mountains. Guided walks across Morecambe Bay are available to those wishing to fully appreciate the splendour of the shore and surrounding area.
www.arnside-online.co.uk